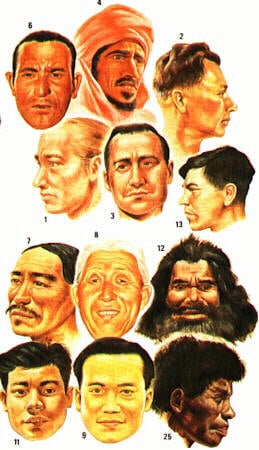 ...It is true that race is a social construct. It is also true, as Dr. Lewontin wrote, that human populations “are remarkably similar to each other” from a genetic point of view

I have deep sympathy for the concern that genetic discoveries could be misused to justify racism. But as a geneticist I also know that it is simply no longer possible to ignore average genetic differences among “races.”

we are learning that while race may be a social construct, differences in genetic ancestry that happen to correlate to many of today’s racial constructs are real.

Recent genetic studies have demonstrated differences across populations not just in the genetic determinants of simple traits such as skin color, but also in more complex traits like bodily dimensions and susceptibility to diseases.

Nicholas Wade, a longtime science journalist for The New York Times, rightly notes in his 2014 book, “A Troublesome Inheritance: Genes, Race and Human History,” that modern research is challenging our thinking about the nature of human population differences. But he goes on to make the unfounded and irresponsible claim that this research is suggesting that genetic factors explain traditional stereotypes.

One of Mr. Wade’s key sources, for example, is the anthropologist Henry Harpending, who has asserted that people of sub-Saharan African ancestry have no propensity to work when they don’t have to because, he claims, they did not go through the type of natural selection for hard work in the last thousands of years that some Eurasians did. There is simply no scientific evidence to support this statement. Indeed, as 139 geneticists (including myself) pointed out in a letter to The New York Times about Mr. Wade’s book, there is no genetic evidence to back up any of the racist stereotypes he promotes.

Instead, “whites” represent a mixture of four ancient populations that lived 10,000 years ago and were each as different from one another as Europeans and East Asians are today.

Compared with the enormous differences that exist among individuals, differences among populations are on average many times smaller

""David Reich is a professor of genetics at Harvard and the author of the book “Who We Are and How We Got Here: Ancient DNA and the New Science of the Human Past.”""