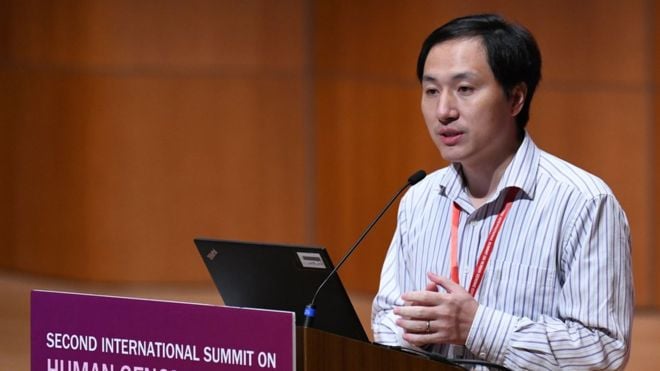 China has halted the work of the scientist who claims to have created the world's first genetically edited babies, and says it will investigate.

He Jiankui caused outrage earlier this week when he told a genome summit he had altered the genes of twin baby girls so they could not contract HIV.

His statement has not been confirmed, but if true breaks tight rules around the use of gene editing in humans.

Prof He's university said it was unaware of his experiment.

The Southern University of Science and Technology in Shenzhen said earlier in the week he had been on unpaid leave since February, and it would be investigating the claims.

On Thursday, China's science ministry said it had "demanded that the relevant organisation suspend the scientific activities of relevant personnel".

What the scientist claimed?

Prof He announced that he had altered the DNA of embryos - twin girls known as Lulu and Nana - to prevent them from contracting HIV.

Speaking to the Human Genome Editing Summit at the University of Hong Kong, he said the girls were "born normal and healthy" and they would be monitored over the next 18 years.

He said he had funded the experiment himself and confirmed his university had not been aware of it.

Prof He also explained that eight couples - comprised of HIV-positive fathers and HIV-negative mothers - had signed up voluntarily for the experiment. One couple dropped out, but there was "another potential pregnancy" of a gene-edited embryo in its early stages.

He said his study had been submitted to a scientific journal for review, though he did not name the journal. He was also evasive about other details, including the names of "some experts" he said had reviewed his work and offered feedback.

Why is his work controversial?

The Crispr gene editing tool he claims to have used is not new to the scientific world, and was first discovered in 2012.

It works by using "molecular scissors" to alter a very specific strand of DNA - either cutting it out, replacing it or tweaking it.

" But experts worry meddling with the genome of an embryo could cause harm not only to the individual but also future generations that inherit these same changes.

Hundreds of scientists, both in China and around the world, swiftly condemned his claims.

Professor Julian Savulescu, an ethics expert at the University of Oxford, said if true "this experiment is monstrous".

"Gene editing itself is experimental and is still associated with off-target mutations, capable of causing genetic problems early and later in life, including the development of cancer," he told the BBC. "This experiment exposes healthy normal children to risks of gene editing for no real necessary benefit."

Many countries, including the UK, have laws that prevent the use of genome editing in embryos for assisted reproduction in humans. Scientists can do gene editing research on discarded IVF embryos, as long as they are destroyed immediately afterwards and not used to make a baby.

" Was humanity born in the mother of all plagues?

Around 100,000 years ago, the human race was on the brink of extinction. Confined to Africa, our population had fallen to less than 10,000. Yet within a few tens of thousands of years, we began spreading around the world.

New genetic evidence suggests that one factor contributing to the population bottleneck was a massive epidemic of bacterial disease. The bacteria were exploiting two immune system genes, turning them against us. So the solution was simple: get rid of the traitorous genes.

Ajit Varki of the University of California, San Diego and colleagues looked at two genes called Siglec-13 and Siglec-17. Both code for proteins that are involved in controlling the immune system, helping to decide whether immune cells should go on the offensive.

Varki found that both genes are active in chimpanzees, but not in humans. Siglec-13 has been entirely deleted from the human genome, while Siglec-17 is non-functional as a result of losing one letter from its code.

Why would we have got rid of two useful immune genes? Varki reconstructed the lost proteins and found that two dangerous bacteria, Group B Streptococcus and Escherichia coli K1, could bind to them.

Varki thinks that early humans were confronted with a massive epidemic of bacterial infection. The two bacteria he studied are particularly dangerous to newborn babies, who often die after being infected. That could explain why the human population fell so precipitously, and why we got rid of the Siglec genes that made us so vulnerable.